The Legality of Online Ordinations on Long Island 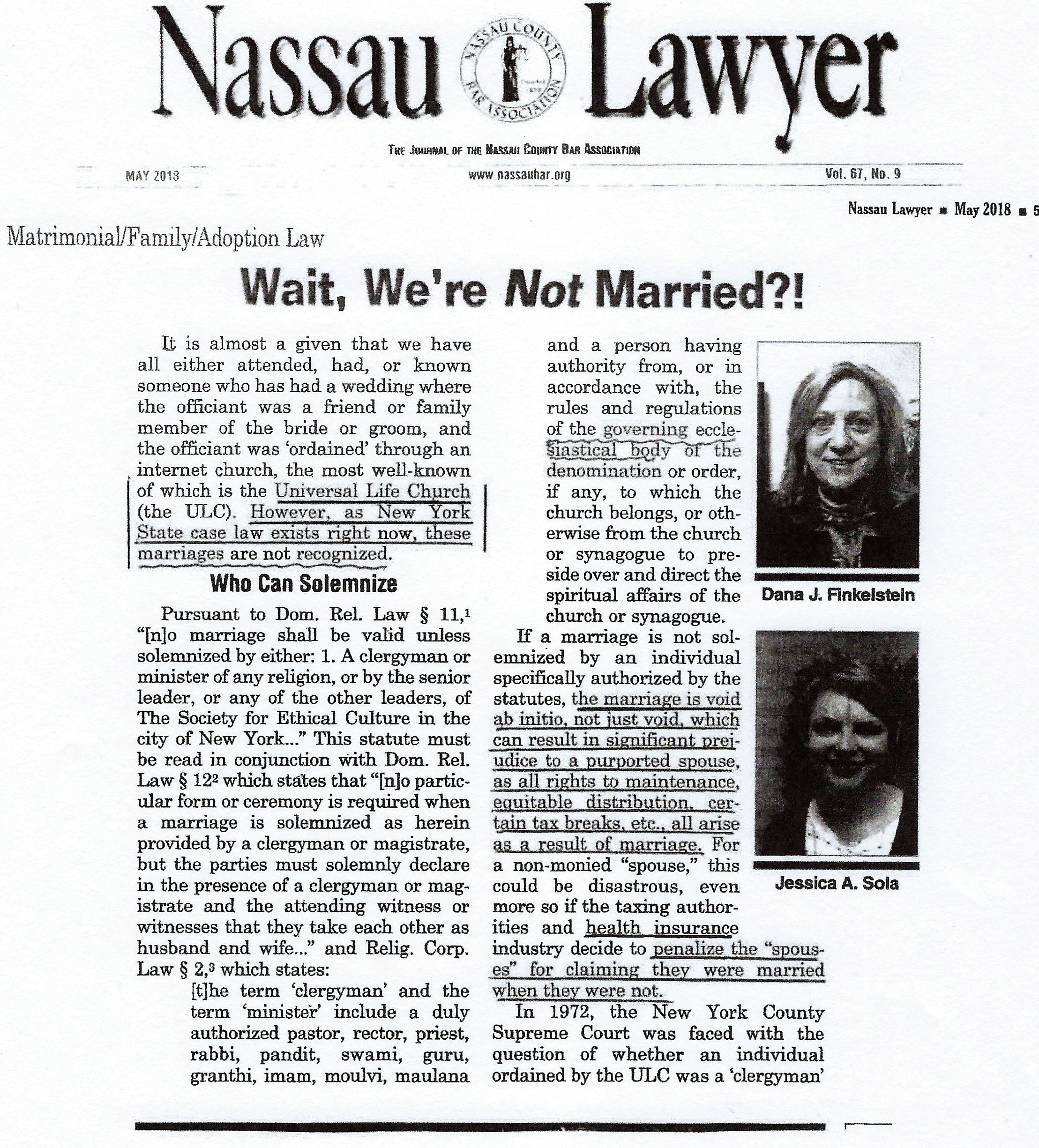 Online Ordinations, Are they Legal on Long Island?

The short answer is no. If it were already legal, there wouldn’t be legislation before our state legislature in Albany trying to make it legal, or at least expand on who can legally perform marriage ceremonies in New York State.

Here is a link to State Senate Bill S430.

This is the most recent proposal to expand who was the right to officiate weddings to include online-ordained officiants.

The 4 previous bills that have failed to pass are also listed in the above link on New York State’s website. If a new bill passes that does permit online officiants to legally sign a marriage license, this is where you will find that information as well.

For more documentation of the couples disenfranchised and wills contested, scroll down to the article from the Nassau County Bar Association’s Law Journal or follow along for a recap.

There is no such thing as license or registration issued by the State of New York for officiants. A claim of being “licensed” or of holding a statewide registration is often a red flag that an officiant may be ordained online. Some officiants will display their NYC Registrations, which clearly say right on it that they are ONLY valid for ceremonies performed within the City of New York.

Here on Long Island, Online Ordinations have become very popular among “professionals” and non-professionals alike. DJ’s, banquet managers, receptionists, even some long time officiants may not actually have the authority to marry in New York State. So, even if you’ve received an officiant recommendation from your catering hall, be sure to always check their credentials. It you google or look up where their ordination came from, and after going to that website, it says “Click Here to Become A Wedding Officiant”, odds are good that you should get legally married by someone truly qualified before allowing them to perform your public ceremony.

When Heather, the founder of Brides of Long Island, was in the corporate world, she saw her boss refuse to give health care to the new spouse of one of his employees. He knew that they were married by a friend, and he also knew that it wasn’t legal for that friend to sign the marriage license. Therefore they were not entitled to healthcare.

In 2017, the Towns of Smithtown and Islip limited their officiants list to only those with Civil Authority. This is because of the liability issues created by recommending someone to perform a service that may or may not be legal. Smithtown and Islip now only give information for sitting Judges, acting Mayors, appointed Marriage Officers and Clerks currently in office.

Some of the catering halls that we work for have been asked by their lawyers to keep our credentials on file. This is because of the liability issues created if their recommended of officiant did not meet New York State’s requirements. When you call Town Hall and ask if online officiants are legal, all they say is “This is a question to ask your lawyer.” or “I don’t think it will ever be a problem”. Some will go as far as to say that the license will be processed, because it’s largely an honor system and there is no registration required on behalf of the officiant.

However, having a Certificate of Marriage does not necessarily mean that the marriage cannot be contested and potentially declared invalid. The question you really want to ask the Clerk is “If we are married by someone who is ordained online, could the validity of the marriage later be questioned in a court of law?” The answer to that is, “YES”, and a bibliography of just some of those disenfranchised by not being properly married is available in the article below, listed case by case.

My advice is, if you really want your friend to get ordained online to perform your ceremony, just get legally married at town hall first. Then do whatever you want for the public ceremony. There are many samples on our site that you are welcome to use. If you want to be legally married in front of family and friends, then hire someone who is legal to marry you. If you have been married by someone ordained online, go down to Town Hall and get legally married. Or you can call us, we have options on how to make your marriage legal too.

For those who want to skip right to the researchable documentation, the list of current court cases and legal precedents are in the article published in 2018 in the Nassau Lawyer – which is the Nassau County Bar Association’s Law Journal – at the bottom of this page. It has more footnotes than I cared to look up, but is clear in the legal status of online officiants in New York State.

A wedding is a once in a lifetime event to celebrate a lifetime of marriage. There should be no reason to wonder if you are actually married or not… Making good choices from the beginning is a far better decision than wondering what to do after the fact. Does, “click here and you’re in business”, sound too good to be true? Trust your first instinct. It is too too good to be true. Does it say on the ordination website that you can perform weddings anywhere and everywhere? Of course it does! That’s how those sites make their money.

Remember also that the personal integrity of the person you choose as your officiant is important. This is the person that you are trusting, not just with your ceremony, but also with your your social security number and your mother’s maiden name when you hand them the marriage license.

The primary reason that online ordinations are particularly frowned upon is that there is absolutely NO identification process in issuing those credentials. The fact that anyone could get ordained with any name – including using your name as theirs – is, frankly, a matter of National Security. The information on a marriage license is enough to create full documents for identity theft. NYS needs to protect its residents as much as possible. 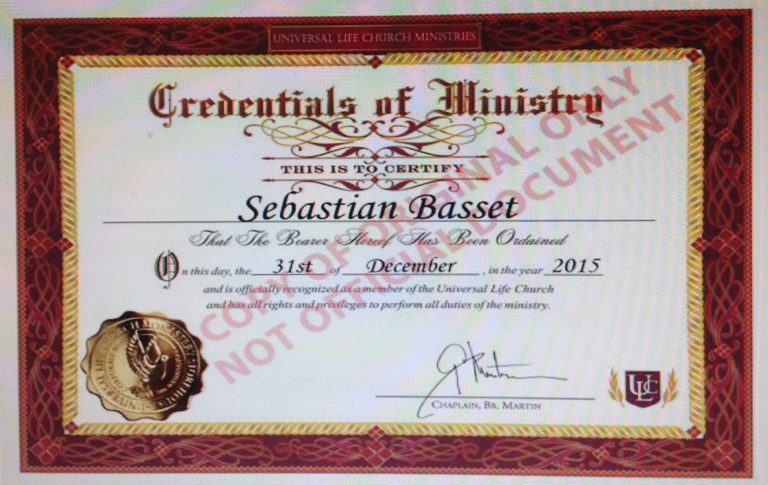 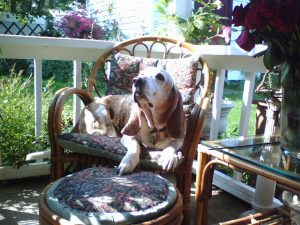 Not only is he a real Basset Hound, but he also passed away in 2008.

Nassau and Suffolk do not require registration and do not check credentials when processing a license. Honestly, you could fill it out at the kitchen table yourselves, using the names of your favorite TV characters, and Town Hall would still process it. Unfortunately having a Certificate of Marriage from the state, doesn’t mean that you are legally married. How on earth can this be? I for one have no idea. But this is the reality of the current situation.

The problem would be if one of you wanted no longer to be married, and to disenfranchise the other by having the marriage declared invalid because the officiant did not meet the state’s requirements. In the precedent setting cases where this has happened, Ravenal v. Ravenal and Raniere v. Raniere, the marriages were declared null and void. That equated to no equitable distribution of assets… So if you are unsure about being married, having a friend ordained online might be even better than a prenuptial agreement. Or at least for one of you.

The ruling of null and void also opens the door to other liability. Things like health care benefits that were paid but not due, taxes that were filed jointly without legal right, all come into question. It becomes a mess. On top of all that, after the current case is finally through the Supreme Court, if the ruling is not retroactive, everyone married prior to the ruling will still be in this grey area.

I had a couple come last fall with a second license for me to sign, so there would be no question as to the validity of their marriage. He had cancer and his children didn’t like the wife. He had no doubt that as soon as he passed, they would contest the will and try to have the marriage declared invalid because a friend, ULC ordained, married them. Although I was able to help them, their situation still saddens me to this day.

For more cases and information from other states see Wikipedia.

For more New York State Laws and cases there is a New York Times Article that notes cases and problems that are still ongoing.

The most recent factual documentation, with footnotes and all was in a May 2018 article, published in the Nassau Lawyer, The Journal of the Nassau County Bar Association. 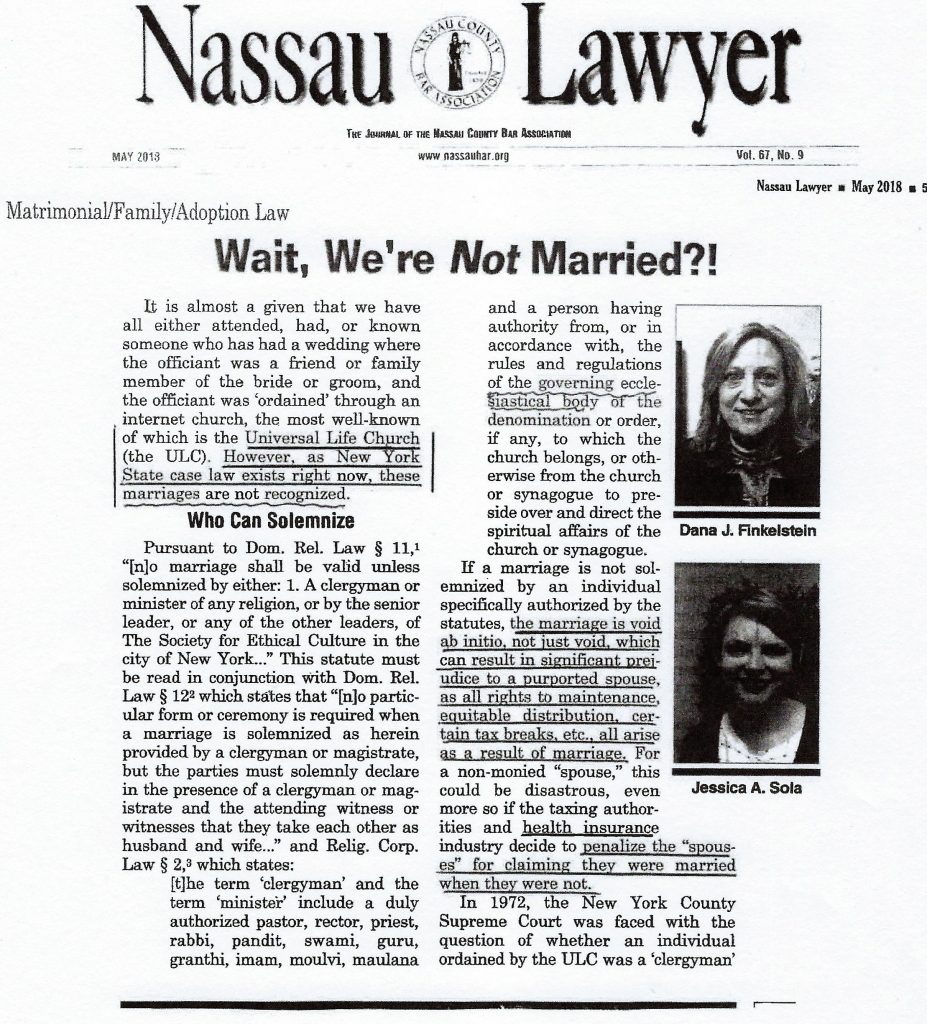 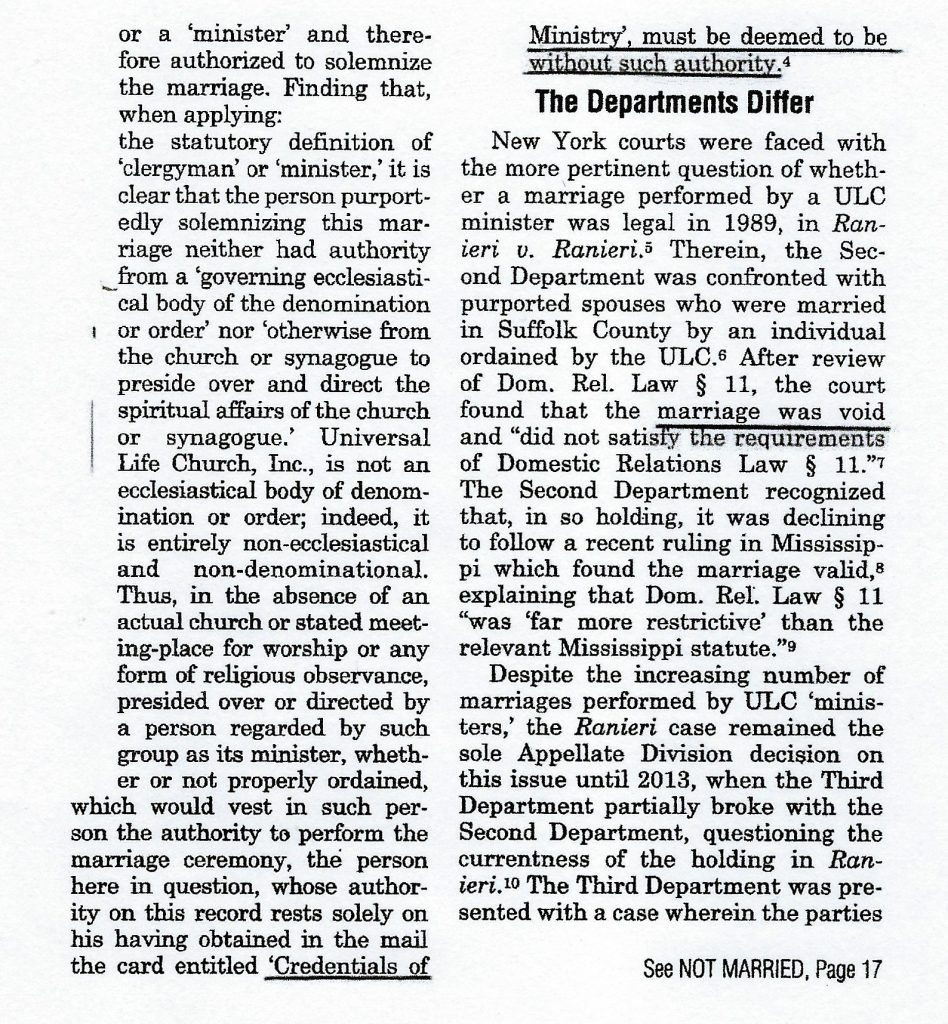 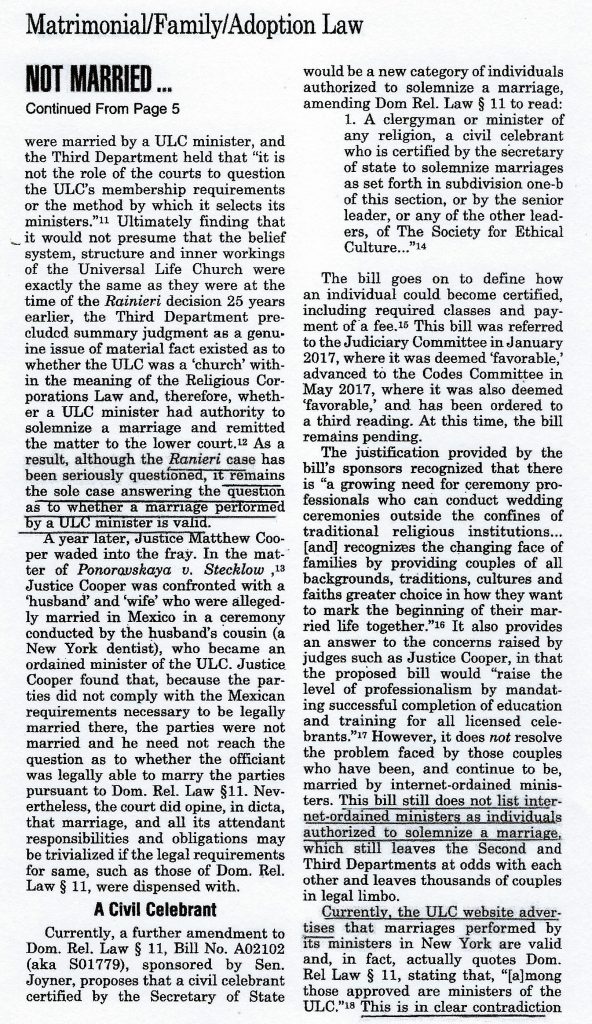 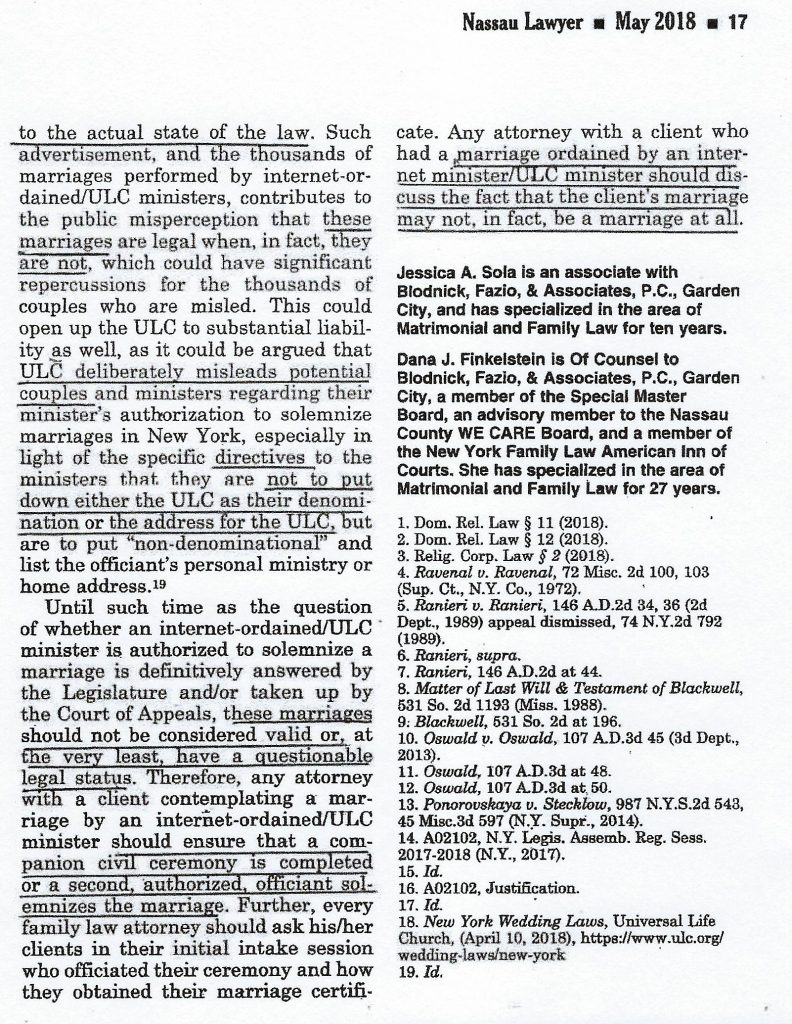