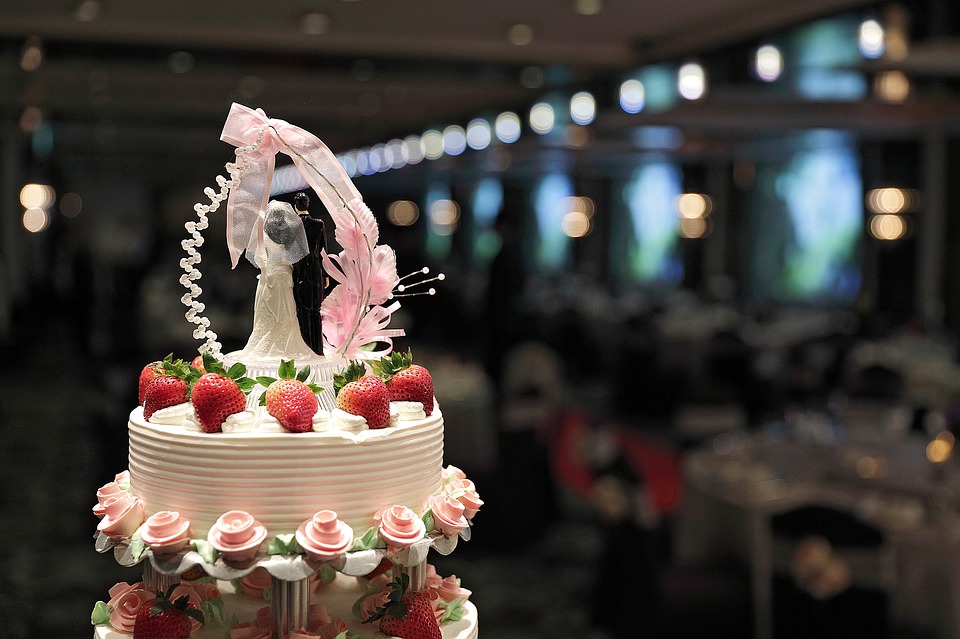 The wedding cake was not always eaten by the bride; it was originally thrown at her. It developed as one of many fertility symbols integral to the marriage ceremony. For until modern times, children were expected to follow the marriage as faithfully as night follows day; and almost as frequently.

Wheat, long a symbol of fertility and prosperity, was one of the earliest grains to ceremoniously shower new brides; and unmarried young women were expected to scramble for the grains to ensure their own betrothals, as they do today for the bridal bouquet.

Early Romans bakers, whose confectionery skills were held in higher regard than the talents of the city’s great builders, altered the practice. Around 100 B.C., they began baking the wedding wheat into small, sweet cakes-to be eaten, not thrown. Wedding guests, however, loath to abandon the fun of pelting the bride with wheat confetti, often tossed the cakes.

According to the Roman poet and philosopher Lucretius, author of De rerum natura (“On the Nature of Things”), a compromise ritual developed in which the wheat cakes were crumbled over the bride’s head. And as a further symbol of fertility, the couple was required to eat a portion of the crumbs, a custom known as confarreatio, or “eating together.” After exhausting the supply of cakes, guests were presented with handfuls of confetto-“sweet meats”- a sort of confetti-like mixture of nuts, dried fruits, and honeyed almonds, sort of an ancient trail mix.

The practice of eating crumbs of small wedding cakes spread throughout Western Europe. In England, the crumbs were washed down with a special ale. The brew itself was referred to as bryd ealu, or “bride’s ale”, which evolved into the word “bridal”.

The wedding cake rite, in which tossed food symbolized an abundance of offspring, changed during lean times in the Middle Ages. Raw wheat or rice once again showered a bride. The once-decorative cakes became simple biscuits or scones to be eaten. And guests were encouraged to bake their own biscuits and bring them to the ceremony. Leftovers were distributed among the poor. Ironically, it was these austere practices that with time, ingenuity, and French contempt for all things British led to the most opulent of wedding adornments: the multi tiered cake.

The legend is this: Throughout the British Isles, it had become customary to pile the contributed scones, biscuits, and other baked goods atop one another into an enormous heap. The higher the better, for the height augured prosperity for the couple, who exchanged kisses over the mound. In the 1660’s, during the reign of King Charles II, a French chef (whose name, unfortunately, is lost to history) was visiting London and observed the cake-piling ceremony. Appalled at the haphazard manner in which the British stacked baked goods, often to have them tumble, he conceived the idea of transforming the mountain of bland biscuits into an iced, multi tiered cake sensation. British papers of the day are supposed to have deplored the French excess, but before the close of the century, British bakers were offering the very same magnificent creations.