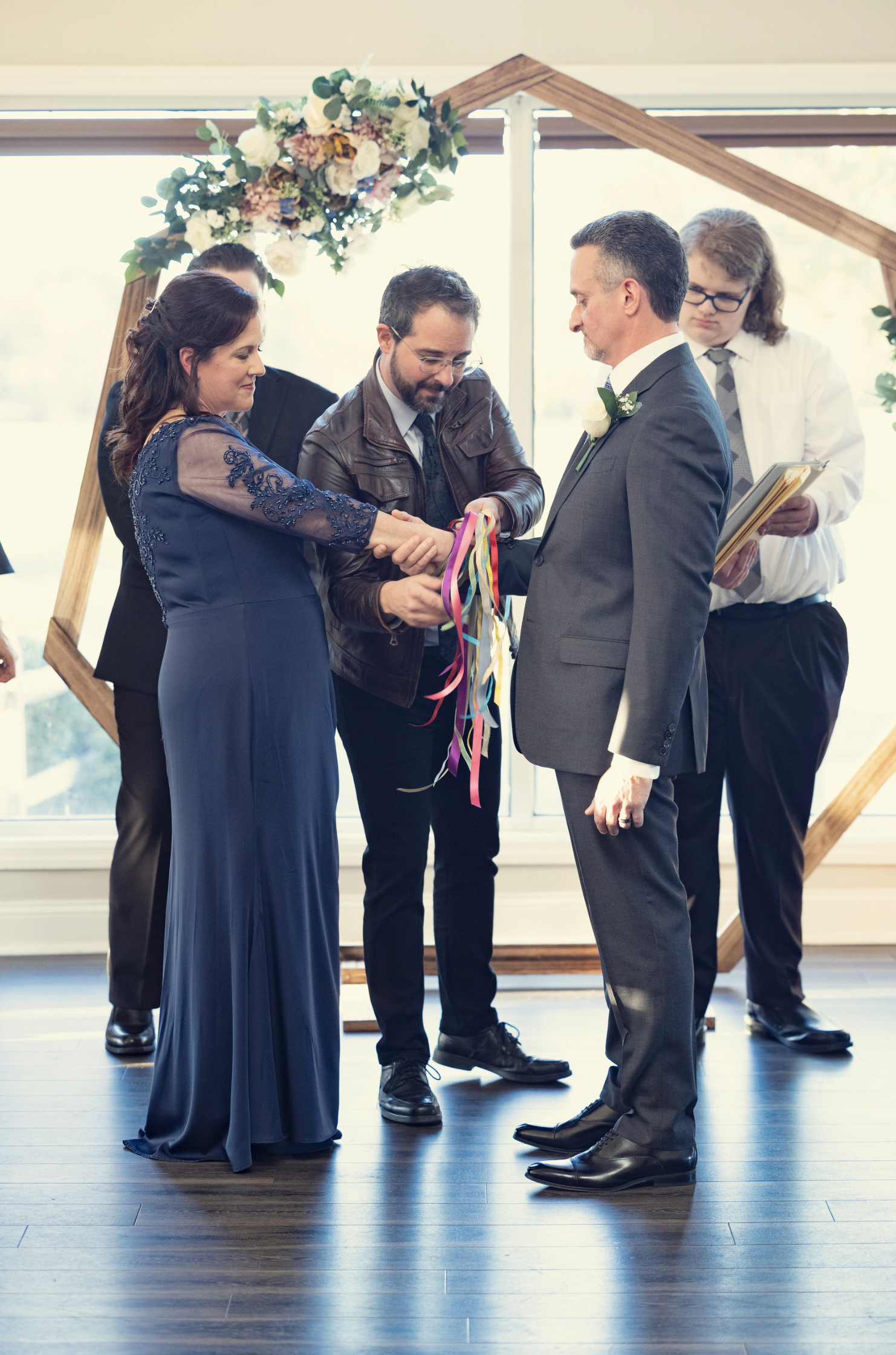 (Photo by Anchor and Lace Photography)

What is a handfasting?

This is one of the most common questions couples who are planning one will hear. It is the symbolic binding of the hands at the end of the ceremony that inspired the terms the “Bonds of Holy Matrimony” and to “Tie the Knot”. Sometimes it is a full Handfasting Ceremony but most often it is a simple binding at the end of a regular wedding ceremony. This custom has been known the world over for centuries. The practice of binding the hands of the bride and groom is not limited to any one religion, nationality or culture. Many couples who do a medieval theme often choose to include it in it’s Christian context as do couples of Celtic decent. When the term Handfasting is used, many people think “Pagan wedding”, and sometimes they’re right. But nothing is ever just one thing anymore and in today’s world binding the hands fits equally well with cakes and ale as it does with holy communion. After all many feel it was the Irish monks who kept Christianity alive in the Dark Ages.

So What’s with the year and a day thing?

The year and a day betrothal ceremony came into being in the middle ages. The political alliance of powerful families by marriage was a common practice and the betrothal of couples too young to be wed was an agreement made by their parents. Among the common folk to be seen holding hands in public was establishment of a partnership. The cord and binding of the hands was, much as the wedding band of today, an outward symbol of an internal bond and connection. Back then rings were only for the very rich, while love knows no such bounds. The ceremony had in it the year and a day clause because Europe in those days was a perilous place. Hunters, Traders, Miners, Sailors would often vanish never to be seen or heard from again. The year and a day agreement marks the time in which the woman could look for a new partner if she so chose to.

But what does all this have to do with the modern practice of handfasting in its betrothal phase?

In today’s world, many wedding ceremonies make many bold and grandiose promises with very little explanation of how a couple is to actually live a long and happy life together. The year before the wedding can actually be more divisive than joining for many couples. There is a real and present danger of not only the stress, but that too much emphasis will be put on all the pomp and circumstance of planning the perfect day rather than the perfect lifetime. The year and a day promises of our generation are geared to spending time, giving thought, and growing together into people who are good and considerate partners, lovers, and friends. The year and a day promises are a commitment not only to one another, but to the quality of life that a couple intends to make last a lifetime. Some couples renew their vows every year on their anniversary as a way of staying focused and making sure they continue to enjoy the things that bring them closer together and avoid the things that could bring distance to their hearts and their relationship. The vows themselves are designed to be tools to achieve the ideal of marriage and to make all of their dreams of 20, 40, and 60 years from now a reality. Other couples use it as a way of having ceremony for their earth based side and one for their more traditional side.